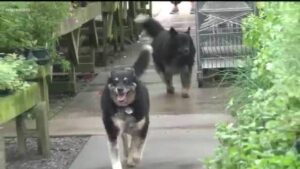 When puppies are born inside or brought to a shelter, it doesn’t usually take very long for them to be adopted. So it’s not much of a surprise that when Australian Shepherd puppies “Randy” and “Travis” found themselves transferred to an SPCA together in 2013, they were adopted within half an hour of each other. What is truly surprising is the story of their serendipitous reunion eight years later. And it was all thanks to the power of a dog’s nose.

“He comes to work every morning, usually for about two or three hours. He greets customers and follows me around,” says Mark Yadon, Foster’s dad.

Mark brings “Travis,” now Foster, with him to work at Mischler’s Flower Shop for a few hours every day. On one particular morning, Foster took a particular interest in Patrick Baird. Normally following his dad around the shop, it was out of the ordinary that Foster found himself following someone else.

Patrick isn’t a “regular” customer of the shop. A perennial ad caught his eye and he was persuaded to peruse the plants. When Mark noticed that Foster seemed so infatuated with Patrick, he headed over to apologize. He explained that he was sorry and that he wasn’t sure why Foster was so interested in him. When Patrick mentioned that Foster was just like his dog, the two got to talking about their Australian Shepherds and the day they adopted them.

“I said well do you remember the name of the dogs when they were at the SPCA? and he said yeah, Randy and Travis. That was it because I knew it was Randy and Travis,” said Mark.

It had stuck in both of their minds that their pups were originally named “Randy and Travis.” Foster had been interested in the smell of his long lost brother! After a bit more banter, the dog dads decided to get their pups together for a reunion. So, a week later, Patrick brought “Randy,” now Luke, back to the store.

The two hit it off, and everyone enjoyed watching them together. When the pair informed the SPCA of their “family” reunion, the shelter said they have never heard of anything like this particular story happening before.