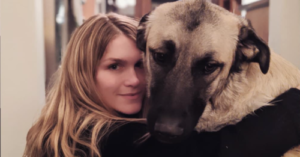 A dog’s size is not necessarily related to its behavior. Sometimes the largest dogs are extremely fearful when they come from tough backgrounds.This makes their interactions with people difficult, and subsequently makes them harder to adopt. A couple in Montana learned this firsthand when they rescued a stray named Teddy.

In October 2018, Wes Siler and his fiancee Virginia loaded a giant dog they met in a junkyard into their car. Prior to her rescue, Teddy had spent the first five months of her life “abused and neglected or running feral” which made her scared of human touch.

Yep, that photo shows her on the day of her adoption, just 4 and a half months old. She’s a very large floof! Initially they believed her to be a Great Pyrenees/German Shepherd mix, but are now pretty sure she’s part Anatolian Shepherd. These are powerful working dogs who don’t necessarily understand affection.

A fearful dog of that size can be difficult to manage, but the couple are no quitters. When they first adopted her, Teddy was unhealthy and uncertain of everything. Even taking her on walks was a challenge.

A proper diet made a huge impact for Teddy. For one thing, she stopped eating her own feces (something dogs often do when they are malnourished.)

Still, though she showed signs of wanting affection, she was too afraid to be hugged or to get too close to her people. Six months after love, patience, and proper care, Teddy started to indicate some trust.

Siler writes that he believes the influence and guidance of the couple’s other two dogs, Bowie and Wiley, really helped Teddy’s learning process.

“One night, probably six months after her adoption, we got her to lay down next to us in bed for a solid 15 minutes. It was such a huge sign of progress that both Virginia and I teared up in relief.”

Now, Teddy is developing the confidence fit for a dog of her size. It took a lot of love and support to make that happen.

“The benefits of learning the confidence it takes to cuddle can be seen elsewhere, too: as Teddy has become more comfortable in our family, she’s also become a more confident, happier dog.”

Siler and his fiancee are certain that the hard work and patience was worth it to see this large pup come out of her shell.

“With a history of abuse and neglect, and arriving in shockingly poor condition, this is a dog that most people would have turned their noses up at. But look at her now.”

Thank goodness Wes and Virginia saw Teddy’s potential and not just her circumstantial behaviors! Take note: no dog is beyond saving.