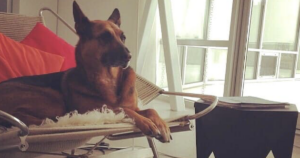 Nicole Sopko and Dan Staackmann love getting DNA tests for their rescue dogs because the results are fascinating. Dogs often have breeds mixed in that you’d never expect! Although they could also have long-lost relatives that are closer than you’d think.

The couple adopted a new rescue dog named Frida from a Chicago shelter. After getting a DNA test done, they discovered shocking news. Frida is related to the couple’s late dog named Greta. The two seem to be cousins, but their humans had no idea. So, Greta is closer to them than they even realized.

Greta came home with her humans back in 2007. They adopted her from the Heartland Animal Shelter after the Chicago Animal Care and Control found her and took her in. The pup quickly became a beloved family member, and the family shared many photos of her on social media.

But sadly, Greta passed away at age 14. She loved traveling to new places, enjoying snacks, and helping her humans with their vegan business called Upton’s Naturals.

A few months later, Sopko and Staackmann decided they were ready to welcome another dog into their home. They fell in love with 8-year-old Frida, who was found by the Palm Valley Animal Society in Texas, but then transported to One Tail at a Time in Chicago. Since she’s such a new family member, they haven’t posted any photos of her publicly yet. However, they did an Embark dog DNA test right away.

Both Greta and Frida are German Shepherd mixes. But Frida’s DNA results also revealed that she and Greta are distant relatives!

Rescue Dogs are the Best

The two canines share 6% of their DNA, which means they’re first or second cousins. Sopka and Staackmann are in awe of this beautiful coincidence, especially since Frida didn’t come from Chicago. It’s like fate brought her to her family.

“Like most people who share their lives with an animal, we were devastated by the loss of our dog, Greta. When we found Frida, we knew that she was meant to be in our family, but we had no idea that she was also Greta’s biological family. I don’t know what the chances are of that happening, but it confirmed for us that some things are just meant to be,” Sopko said.

After Greta passed away, Upton’s Naturals sold a “For Greta” donut that donated proceeds to Chicago animal shelters. Now, the couple plans to launch a “Cousin Frida” donut next with the same benefits. After all, no love can compare to the love of a rescue dog.

The post Couple Discovers Their New Rescue Dog Is Related To Their Late Canine appeared first on iHeartDogs.com.