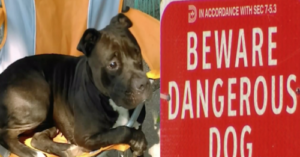 The City of Dallas has an ordinance pertaining to dogs that have been deemed dangerous or aggressive. Although the aim of the program is to maintain safety in neighborhoods, some Dallas residents believe that petty humans are abusing the program in order to get back at neighbors during a feud. Nyesha Anglin believes that to be the case and it cost Nyesha’s beautiful dog Chloe her life.

“Dallas Animal Services encourages responsible pet ownership through continued education and outreach efforts. If a dog has been deemed dangerous in the City of Dallas, the owner must comply with specific requirements to ensure that people feel safe where they live, work, and play. Dangerous and aggressive dog determinations are governed by both state law (Section 822.041-.047 of the Texas Health and Safety Code) and local ordinances.”

“A dangerous dog is a dog that makes an unprovoked attack (or unprovoked actions that suggest the dog will cause serious bodily injury in the future) that causes injury to a human.”

One of the blurry pieces of the ordinance is the “suggest” wording. If a dog rushes towards you, for example, but stops and does not actually attack you, that “suggestion” of future harm is enough for a person to complain and for your dog to be deemed “dangerous.”

In 2016 the city was facing a loose dog crisis. On the south side of the city, people were routinely being attacked and bitten by dogs, resulting in serious injuries and death. One man was attacked and killed by a pack of loose dogs. In response to the crisis, the city tightened up ordinances. Reports of dog bites are down as a result, but that does not mean there are not some inherent problems with the program.

Fees and Requirements Associated with Having a “Dangerous” Dog

A single complaint from someone can open an investigation with Dallas Animal Services and land your dog on the Dangerous Dogs List. Once that happens you are responsible for a set of fees and requirements including:

For some, the costs are simply unaffordable so they turn their dogs over to Dallas Animal Services.

The Case of Chloe and Nyesha Anglin

Nyesha Anglin asserts that her dog Chloe was a loving dog that never once bit anyone, animal or human. Nyesha and her neighbor became involved in a personal disagreement that had nothing to do with Chloe. As things escalated between the disputing parties, Nyesha’s neighbor filed a complaint about Chloe.

According to the complaint filed, “Chloe ran up to the neighbor and her mother, barking and off the leash, according to the document. The letter went on to describe how the woman needed to use a suitcase to protect herself from the dog. No dog bite was reported.”

But here’s a sticky point. The neighbor did not file the complaint right away. She waited six months to do so. Why would she wait? Nyesha believes she waited because the neighbor discovered a way to inflict pain on Nyesha during their completely unrelated dispute.

Given the state of emergency the city was under in 2016, it is understandable that rules and enforcement were stepped up. However, dogs should not be caught in the middle and used as tools in completely unrelated arguments among human neighbors. Nyesha lost her friend. Chloe lost her life. The life of a dog is worthy of much greater scrutiny in cases such as these.

Do you think Dallas’ ordinances meant to keep humans safe are harming the city’s pets? Or does human safety justify the way the city handles this issue? Let us know what you think on Facebook.

The post City Of Dallas Euthanizes A “Dangerous” Dog that Never Once Attacked Anyone appeared first on iHeartDogs.com.