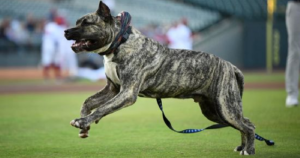 “Ethan the Dog” is ready to play ball! Which, if you’ve been following his story, you know is nothing short of a miracle. He was chosen as the “celebrity” guest to throw out the ceremonial first pitch at the Louisville Bats inaugural “Hops & Hounds” event.

Bats fans were encouraged to bring their best furry friends to join them for an evening of baseball and sampling locally brewed beers. The event was held during the Louisville Bats minor league baseball game at Slugger Field.

Ethan and his story have captured the hearts of people all over the world. In January of this year, the one-year-old dog was found in a box outside of the Kentucky Humane Society. Someone discarded him while he was on the brink of death. He was starved to the point that he was so weak, he couldn’t even lift his head. A dog his size is meant to be 80 pounds, and Ethan was a startling 38 pounds when he was found.

There, he was kept on his IV fluids and fed every two hours. His condition became dire when he was rushed to the emergency vet for displaying rapid breathing and neurological symptoms, like twitching. Ethan survived and went through a period of living with daily seizures, but he has overcome the odds.

“His loving personality and joy for people is back in full swing and he continues to bring smiles and happiness to everyone we run across, his seizures seem to be gone for now. But we monitor his health so closely every day,” his family wrote in a Facebook statement.

How exactly does a dog throw out the first pitch at a baseball game?

Well, Ethan had a little bit of help from his dad, Jeff. The original idea was for Jeff to have Ethan stay on the pitcher’s mound while he walked to home plate, and Ethan was to bring him the ball. But Ethan had other plans. He is still a puppy, after all.

About halfway back to home plate, Ethan decided it was time to run and essentially chased his dad as he backpedaled towards home plate. Then, Ethan ran off towards the first base dugout. But, Jeff called him, and Ethan ran right back over to him. Together, they gave the ball to Buddy Bat, the Louisville mascot. You can see the adorable video below.

Ethan has his own Facebook page, and he continues to inspire hope and resilience in his followers. His journey of losing enough muscle mass to not even be able to lift his head to now being a healthy, happy dog is incredibly motivational.

“Ethan has served as a beacon of hope for so many and has shown what the power of love, hope and courage can really do.”

The post Celebrity “Ethan The Dog” Chosen To Throw The First Pitch At Baseball Game appeared first on iHeartDogs.com.