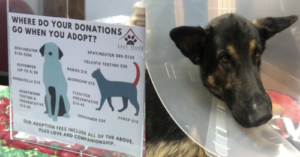 Last Hope Animal Rescue in Cedar Rapids, Iowa works hard to take care of the animals at their facility. The majority of that care relies heavily on donations, many of which are made in cash. So when the staff at the shelter came into work one morning, they were devastated to see that their donation box was shattered and left empty. They all wondered how any person could do such a horrible thing to dogs and cats in need.

When a volunteer arrived at the shelter that morning, they found the front door propped open. The front lobby was a mess, and all the cash donations were stolen. Not even a penny was left behind.

There were no signs of forced entry, but there was a paper covering one of the security cameras. Amanda Rushton, the intake coordinator for Last Hope, said that she is unsure if someone let themselves in and hid while the shelter was still open or if they found a way in after. They just don’t know how it happened, which is the most unsettling part.

However, all the animals in the shelter are safe. Rushton and the rest of the staff are very grateful for that. The safety of the shelter animals is a priority for them, so it was a relief to know that no animals were harmed.

All the money that was in that donation bin goes directly to the care for the animals. It pays for vet costs, food, medicine, and more. Some of the animals, such as a German Shepherd named Chief who was hit by a car, were relying on that money to help them heal. The staff and volunteers are unsure how much money was stolen, but Rushton points out that every dollar matters to them.

Last Hope is now in desperate need of donations. They currently have well over 50 animals at their shelter, so donating either money, time, or supplies would be a great help to these animals. If you want to help out, please contact Last Hope Animal Rescue.

The police have been helping in any way possible, but they currently do not have any suspects. If anyone knows anything about what happened that night, please contact the Cedar Rapids Police Department.

Stealing donations that were for animals in need is unforgivable. Not only did these robbers take money that was going to a good cause, but they prevented dogs and cats from getting the best possible care. The shelter will do whatever they can to keep these animals as safe as possible, but it will be more difficult than usual after this horrible event. Hopefully the culprit will be captured soon and punished for their heartbreaking actions.

There doesn’t appear to be an official fundraiser, but several Cedar Rapids businesses are helping raise funds and awareness. If you’d like to donate, you can click here to do so through a Facebook fundraiser run by Fong’s Pizza.