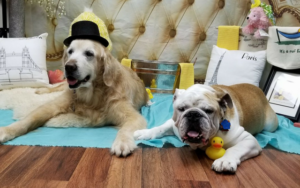 Hearing bad news is devastating, but it always helps to have a friend by your side. Two dogs, a Golden Retriever named Buckeye and a Bulldog named Harley Bruiser, both received the worst news possible; they only had a few months to live. Cancer is quickly taking over their bodies, but their respective families are determined to make their last months at home the best they’ve ever had. They’ve put together bucket lists for the dogs, and the two buddies are spending their days doing exactly what they love—and the best part is, they get to do it together.

Grace Kemp, a veterinarian at Goodworks Veterinary Hospital, and her husband, Joel, have included Buckeye as part of their family since they first adopted him from a Golden Retriever rescue many years ago. He has severe allergies, and Dr. Kemp says he’s been on some type of medication his entire life.

“Without treatment, he would scratch and traumatize himself constantly, tearing up his skin, and we try to keep his level of itching as minimal as possible.”

They have always been committed to giving their golden boy the best possible life, and that became even more important this past year. About a year and a half ago, the other canine member of Buckeye’s family, Kenya, was diagnosed with kidney failure. Despite aggressive treatment, Kenya passed away in March of this year. At the same time, the Kemp family was dealing with another heartbreak.

On Christmas day, Buckeye needed surgery to remove a blockage in his digestive system, and x-rays also showed a mass in his abdomen. After testing, 15-year-old Buckeye was diagnosed with a rare form of liver cancer. He was given 4-6 months to live.

While there will be no cure for Buckeye, Dr. Kemp is focusing on maintaining his quality of life all the way to the end. She knew she wanted to cherish the last few weeks she had with Buckeye, and inspiration from a friend and former patient gave her the best idea on how to do it.

Exactly three years ago when Dr. Kemp was first starting off as a veterinarian, she met Harley and his mom, Ashley McElfresh. Harley was rushed to the clinic where Dr. Kemp worked because of some kind of intestinal blockage. He needed exploratory surgery to figure out what the problem was, and the outlook didn’t look good.

“I got the call that surgery was going to happen that morning. I drove to the clinic where I would sit outside all day in the vehicle while the surgery was being done, just in case something were to happen. It was an extensive and very long surgery.”

Finally, there was an official diagnosis for Harley—but it wasn’t reassuring news. He had a rare twisting of the bowel, and in the midst of trying to repair it, Dr. Kemp learned Harley was also septic. To save the dog’s life, she needed to do something she’d never done before. She had a textbook open during surgery to guide her and slowly worked to help Harley. After a long and stressful surgery, Dr. Kemp had done it. Harley needed to stay at the clinic for an additional 10 days, but he was eventually able to go home.

“On this day three years ago we were given the ultimate gift—the gift of life—a gift that would give us three more wonderful years with our sweet Harley.

McElfresh and her family have cherished the time they’ve had with Harley since. Then on April 17, 2018, their world fell apart. Harley was diagnosed with lymphoma, and his time was running out. Like Dr. Kemp, McElfresh was also grieving from the loss of another family dog, Pup.  She decided Harley deserved to experience all the best things in life, so she started planning a bucket list. One of those items on that list was to visit with the veterinarian that saved his life three years ago. McElfresh and Harley met up with Dr. Kemp and Buckeye, and the two women decided both of their terminal dogs would spend their last days on Earth as happy as possible. They’re working their way through a bucket list as a way to honor the dogs they’ve already lost and embrace the two they still have—no matter the amount of time they have left.

The list started with around 20 items, but they didn’t stop there. They’ve completed over 52 bucket list items, and they’re adding new things to the list every day. Things they’ve already accomplished include shopping at upscale doggy boutiques, riding skateboards, riding in the sidecar of a Harley motorcycle, snuggling with the plushest blankets, eating the best food, and getting their names in several popular media outlets. The next item on the list is to visit animal shelters to meet and sponsor other senior rescue dogs.

“The bucket list has helped me with my grief over the loss of my sweet Kenya and the impending loss of my gentle Buckeye. Once he is gone I intend to do good things for other senior animals to honor their memory.”

Whenever they can, Harley and Buckeye get together to cross more things off their bucket lists. Some days, however, making the most of their last few days means lying in the sunshine surrounded by the people who love them most. They don’t always have the energy for grand adventures, but their families are making sure every second is a second worth living.