Britney Spears’ Fiancé Surprises Her With Doberman Puppy For Protection 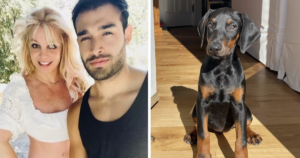 After a lengthy court case about her conservatorship with her father, it seems like Britney Spears is about to be free! So, to celebrate, she got engaged to her boyfriend, Sam Asghari. It’s suspected that she wasn’t allowed to get married and have kids under the conservatorship.

But now, Spears’ family is getting even bigger. Her new fiancé surprised her with the cutest Doberman puppy. He hopes that the pup won’t just be a loving addition to the family, but that she’ll also protect Spears from any danger coming her way. Yet, it’s hard to imagine how anyone would be afraid of that sweet puppy face!

Asghari announced the new puppy on his Instagram page. He posted a video of him introducing the Doberman, whose name is Porsha, to Spears. He said that Porsha will unconditionally love Spears and be trained to protect her from anyone with bad intentions. Then he also posted an adorable photo of the pup.

“Surprised my fiancé with our newest member to the Family,” Asghari captioned the post.

Later, Asghari added another video to his Instagram story, showing him working on training with Porsha. She has already learned to sit on command, so she seems to be learning quickly!

Asghari’s followers were just as excited as Spears about this news. Many people commented with heart emojis, mentioning how adorable the new furry friend is. Several people also mentioned how happy they are that Spears finally found a devoted partner like Asghari.

Life is Looking Up

Spears’ life has not been the most pleasant during her rise to fame, but things are finally looking up for her. She’s starting to look happier and more like herself every time she posts. Hopefully, this puppy will bring her joy as well as safety.

Spears reportedly has two other dogs: a Yorkie and a Maltese. Earlier this year, Spears’ housekeeper took the dogs and accused Spears of being neglectful. Legal charges were dropped, and it’s assumed that the small dogs are back in Spears’ care. Hopefully, they’ll get along well with Porsha.

As cute as this gesture is, new dog parents should remember that puppies shouldn’t be a surprise gift. Dogs are a big responsibility, so the whole family should be prepared before bringing the dog home. Yet, it’s clear that Porsha will be loved in her new home, so hopefully, she will be well cared for too.

The post Britney Spears’ Fiancé Surprises Her With Doberman Puppy For Protection appeared first on iHeartDogs.com.