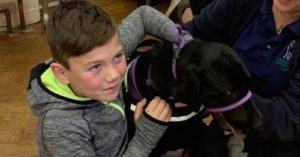 Children and dogs go together like peanut butter and jelly — especially when the child is on the Autism spectrum, and the dog is trained to keep him safe!

A Black Lab named Jade joined the Miller family just in time for the holidays!

“It was the most emotional assessment I’ve ever done. It was a tearjerker,” ADNI’s Geraldine McGaughey told BBC News.

Lewis’ mother, Danielle Cooper, encouraged him to write a letter to help the assessors understand just how much an assistant dog would change his life for the better.

Lewis has trouble regulating his emotions and reading other peoples’ reactions, meaning he sometimes comes across “rough” to other children.

“He loves movement, swings, running, jumping, anything that is aggressive exercise. He would play football for hours,” Danielle says. She adds that at home, Lewis often has trouble sleeping. “He has very high anxiety. He hears noises at night that aren’t there.”

ADNI Autism dogs are trained to keep children safe outside the home as well as provide emotional support. When Lewis is out and about, he will wear a backpack with a tether connecting to Jade’s collar or harness.

Should he become frightened or overwhelmed, Jade will sit down, preventing Lewis from running away and getting lost.

At home, Jade’s calming presence will help reduce Lewis’ anxiety and improve interactions with his four siblings. Best of all, Jade will be Lewis’ best friend, something he greatly needs after the recent death of a close school friend.

If you are wondering what Lewis wrote to help sway the ADNI assessors, here is an excerpt from his letter:

He added that if he had an assistance dog he wouldn’t be scared to go upstairs at bedtime, to come downstairs to get his cereal, or to watch TV.

Jade hasn’t been with the family long, but Danielle reports, “it’s been going really well. It’s been like an early Christmas present. To get lying on the sofa with your son beside you and the dog in the middle is amazing.”

According to research from the University of Missouri College of Veterinary Medicine,having a dog helps improve social skills in children with Autism. Just imagine what a difference a dog like Jade can make!