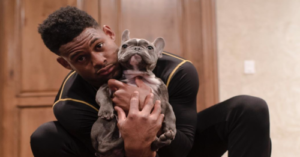 There is something so ridiculously adorable about an elite, professional, star athlete who has a sweet, cuddle bug pup like a French Bulldog. The combination is completely magnetic. Based on how many people are following Boujee and his dad, Pittsburgh Steeler receiver Juju Smith-Schuster, this pair is no exception. From training camp to the dog park to play dates with his “girlfriend” Portia, Boujee and his human Juju are cracking smiles and opening hearts all over Instagram.

Juju Had a Serious Fear of Dogs Before Boujee

When Juju was around 10 or 11 years old he had a super scary experience with a Chihuahua. He was getting out of the car to go into his school in Long Beach, California for a summer session. He spotted the Chihuahua across the street and instantly felt fearful. He started running as he got closer to the dog, sensing something was off. The dog made chase.

Juju ran as fast as he could, which is obviously faster than most of us, but the dog was close on his heels. He made it all the way into the classroom, leaped on top of a desk, and only finally got relief when his teacher managed to get the dog out of the room. Ever since then, he had a deep fear of dogs. Over time he had more and more pleasant and positive interactions with dogs and his anxiety was diminished. So much so, that when he moved across the country for California to Pittsburgh as a second round draft pick in 2017, he decided he needed a puppy companion.

Birthday Party was so Litty 🔥😊

Juju Chose Boujee After Being Around Other Frenchies

The Steeler’s center, Maurkice Pouncey had three French Bulldogs. After talking to him about it, Juju decided that Frenchies were the breed for him. He decided to get a beautiful blue one who was bred in Northern California. Boujee was flown to Pittsburgh to meet his Dad and the rest is history in the making.

Boujee and Juju Are Regulars at the Local Dog Park

Just like ‘regular’ dog folks, Juju takes his pup to the dog park to romp around and socialize with other dogs. They have normal conversations about their dogs and yes, fans certainly like to talk football with Juju. He’s happy to oblige. He sets up playdates with other dogs and although he realizes many people only do it because they want some face time with a pro player, he is fine with it. They all get something out the deal. It’s a win for all involved.

Boujee Has an ‘Instagram Official’ Girlfriend and it is Precious

Boujee and a fawn Frenchie named Portia met at a Cheesecake Factory about a year and a half ago. Portia’s dog mom, Nicole Celko, was eating at the bar when Juju came in with Boujee. Nicole asked Juju if his dog was friendly and explained that her French Bulldog, Portia, was nearby. They introduced the dogs and it was love at first butt wiggle. The two dogs have a real affinity for each other and are often pictured together on both of their own Instagram pages. Nicole and Juju also help each other out, swapping dog watching duties when one or the other is in need.

We absolutely adore all the love and adoration that is plainly visible between Juju, Boujee, and all their doggie friends. If you want to keep tabs on your new favorite Frenchies, follow them @boujee and @portia_from_pittsburgh. Prepare for regular heart melts.

The post Boujee The Frenchie And His Baller Dog Dad Are Crushing The Instagram Game appeared first on iHeartDogs.com.