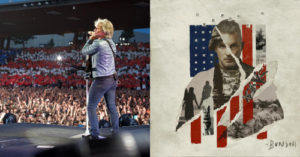 Grammy Award winning band Bon Jovi has just released “Unbroken,” a song featured in the upcoming documentary To Be Of Service. The song explores the struggles that are faced by military veterans during war and after they return home – to “normal” life.

100% of net proceeds from the download of “Unbroken” will be donated to the Patriotic Service Dog Foundation, a non-profit organization, providing service dogs to veterans and fire responders in need.

“This song is meant to honor America’s veterans and their service, but I also wanted to take an unflinching look at the reality of their daily lives and struggles,” said Bon Jovi.

Jon Bon Jovi recently made the official announcement of the release of “Unbroken” via his YouTube channel.

To Be Of Service

Directed and produced by Academy Award-nominated director Josh Aronson, “To Be Of Service” details the lives of military veterans suffering from Post Traumatic Stress Disorder and the amazing service dogs that they have been paired with. It’s a movie about relationships – life-changing bonds formed in a time of need. It’s a tale of love, support, recovery and survival.

There will be a limited theatrical release followed by a Netflix release on Veterans Day, November 11.

“An estimated 460,000 veterans from the Iraq and Afghanistan war alone, struggle with Post Traumatic Stress Disorder (PTSD) or Traumatic Brain Injury (TBI). These conditions can lead to sleeplessness, depression, anger, anxiety and isolation. While these feelings can be overwhelmingly difficult, they are treatable, but so many continue to suffer in silence. Each day, in the world’s greatest nation, 22 of our heroes will take their own lives.” –Patriotic Service Dog Foundation

The mission of the Patriotic Service Dog Foundation is to reduce the number of veteran suicides from “22 to Zero.” By pairing service dogs with veterans in need, the Patriotic Service Dog Foundation aid those suffering from the affects of war, like PTSD, by helping them to be more independent, self-confident, and comfortable with life after military service.

Military veterans sacrifice so much – time away from home and family, the stresses and pains of war. Sometimes, they pay the ultimate price, giving their lives in service of our country. Show your support and download “Unbroken” today on iTunes, Google Play, Amazon and most major music providers.

“With this prayer I’m hoping, we can be unbroken.” –Unbroken by Bon Jovi

Do yourself a favor. Watch the full video below.