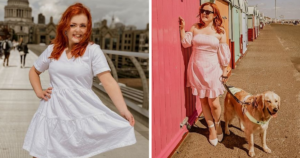 Lucy Edwards ventured out for a bite to eat with her fiance, Olly, to a Yo! Sushi restaurant in Central London. Of course she had her guide dog Molly by her side, as Lucy has had a guide dog since she was 18 years old. Having a guide dog gives Molly the confidence to navigate the world, despite having lost her sight at age 17. When the trio was being seated at the sushi establishment, the server noticed that Lucy had a dog with her, and decided to confront her about it.

In footage taken of the conversation, the server can be heard saying “I’m telling you the dog is not allowed,” while Lucy can be heard fighting back tears and responding with, “You can’t tell me that my guide dog is not allowed, you’re breaking the law.” Then, the server and her went back and forth a few times, with the server continuing to insist that Lucy’s guide dog Molly was not allowed to be in the restaurant. Lucy then informed them of the 1995 Disability Discrimination Act, which is now part of the UK Equality Act of 2010, and grants access to guide dogs and their owners to the majority of services, venues and vehicles. But despite this, the server still insisted that Molly was not allowed to be there.

This seriously upset both Lucy and Olly, and they then insisted on speaking to a manager. Eventually, they were offered a table, and a manager insisted that Molly was indeed allowed to be there, but Lucy inevitably decided to leave. She had become simply too upset from the dispute to want to stay. While she was obviously fighting back tears as she was speaking to the server in the restaurant, Molly explained that she has had so many entry refusals that she is “almost numb” to it and that being refused entry is just “part of her life.”

“Often there’s times when I think to myself, ‘I don’t have the mental strength to deal with this today, I’m going to leave Molly at home,’ which is awful, because she makes me the most confident that I can be with my disability, and at the end of the day she is vital,” said Lucy.

A spokesperson shared that after hearing about the incident, Yo! Sushi contacted Lucy to personally apologize for the way she was treated. During the conversation, they were adamant that the worker had made a mistake and wanted to be clear that “of course guide dogs are welcome in all of their restaurants.”

“I had the confidence in that moment, because I had my fiancee with me, to advocate for myself, but I would say that’s the most successful I’ve been, and I’ve only gained that confidence after being beaten down for years and years, and I just don’t know where this leads us as a society,” shared Lucy.

This isn’t the first time Lucy and a guide dog have been denied entry to an establishment based on the fact that she had an animal by her side. It’s obvious that more work needs to be done to educate businesses on the laws and rights granted to individuals who use guide dogs as a mobility aid.

“I don’t know when this discrimination is going to stop. Every time I talk about it I get emotional because I don’t know when we’re going to achieve equality. I don’t want to fight to just live a life that I deserve,” said Lucy.