Blind Husky Has The Cutest Reaction When She Senses Snow 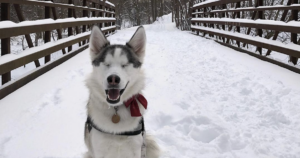 A Husky named Mackenzie arrived at her forever home when she was 10-weeks-old. At the time, her vision wasn’t perfect, but she seemed healthy otherwise. Yet, as she grew up, she developed glaucoma in one eye, and then the other. Despite Mandy Leung’s efforts to keep her puppy’s eyes healthy, the condition worsened. Leung eventually decided that the best thing to do for Mackenzie was to have her eyes removed to eliminate the pain.

It seems like a tough transition, but Mackenzie quickly got used to her new life. You’d never realize she’s blind at first, especially based on her heartwarming reaction to snow.

Since Mackenzie lost her sight at a young age, she quickly adapted to life without vision. Instead, she uses her nose to get around, and being blind doesn’t hold her back one bit. She loves getting attention from humans, playing with other dogs, and most of all, running around in the snow.

“I love taking Mackenzie to new places to explore. New dog parks, new hiking trails. I want to expose her to as many new things as I can, that way she can experience the things normal dogs do. Even if you can’t see the beautiful scenery, you can smell all the different scents and just absorb it all,” Leung said.

As much as Mackenzie loves her outdoor adventures, everything is always better for her if there’s snow. Leung says that snow is one of Mackenzie’s favorite things in the world. While she’s often quiet and relaxed inside, she gets a burst of energy as soon as she senses the snow outside.

In one viral video on Mackenzie’s Instagram page, Leung captured the Husky getting overly excited about a fresh snowfall. The pup bounds outside and down the porch stairs with ease, and then begins running in circles around the snow-covered yard. If it were up to Mackenzie, she’d spend all day out there.

Making the Most Out of an Unfortunate Situation

Sometimes, Mackenzie spends several hours playing in the snow at a time, and she’s disappointed when her mom makes her eventually come inside. Luckily, her thick winter coat keeps her safe while outside in the cold temperatures. Instead of wallowing in sadness after losing her sight, Mackenzie is happier than ever. Her journey is an inspiration to many.

“Learning to adapt at such a young age has made her into a very confident girl,” Leung wrote on Instagram. “She gets around new places just fine and can play fetch like a normal dog! I even forget that she’s blind sometimes because she stares right into my eyes when she looks at me.”

Someone that Mackenzie has inspired the most is her littermate, Zorro. She sometimes meets up with him for playdates, and he recently had to have his eyes removed for similar reasons. So, Mackenzie didn’t hesitate to stick by his side and teach him some things after his surgery. Now, they still have playdates together as if nothing has changed.

It’s easy to pity special needs dogs, but in most cases, they’re just as optimistic and fulfilled as any other dog. Like every canine, they have their quirks, habits, and favorite things. And, of course, Mackenzie’s favorite thing will always be running around in the snow, no matter what challenges life throws at her.

The post Blind Husky Has The Cutest Reaction When She Senses Snow appeared first on iHeartDogs.com.