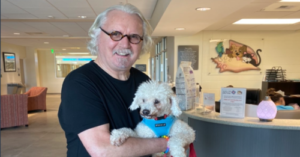 Comedy fans and Scots especially probably remember Billy Connolly aka “The Big Yin.” He’s a stand-up legend and also acted in tons of films including “The Boondocks Saints” and “Gulliver’s Travels.” You also probably know then that Connolly hasn’t been very active recently.

The 77-year-old Scottish actor and comedian has had a difficult past few years. In 2013, he was diagnosed with Parkinson’s and also underwent prostate surgery in the wake of a cancer diagnosis. You’d never be able to tell all that just by looking at a photo of “The Big Yin” grinning from ear to ear with his new rescue dog in his arms.

Pamela Stephenson, Connolly’s wife of 30 years, tweeted a photo of him and his newly adopted rescue dog last week.

If the internet did its thing of poorly indicating tone, Stephenson refers to Lincoln as a “savage beast” sarcastically. Look at that sweet face! In fact, many of Connolly’s fans who did observe that sweet face noted the Poodle mix sort of resembles his new dad.

One Twitter user, @_LFC_1972, responded the two must be fated to be together.

“They say that dogs resemble their owners, It looks like Billy and Lincoln are made for each other.”

I’ll give them hair color, but beyond that I’m not sure I see it! What I do see is one happy guy and one equally as happy dog with a forever home.

Many other fans were just glad to see Connolly looking well. Some noted their confidence that Lincoln has a great life ahead of him with this family.

If you’re a fan of “The Big Yin,” you probably instantly associated the words “Billy Connolly” and “dog” with his famous song “D.I.V.O.R.C.E.”

Our little dog is six years old, and he’s smart as any damn kid
But when you mention the V.E.T. he damn near flips his lid
Words like S.H.O.T. shot or W.O.R.M. worm
These are words which make him S.Q.U.I.R.M. squirm
His Q.U.A.R.A.N.T.I.N.E starts today
Because he bit the V.E.T. and then he ran away
He caused me and my wife to have a big fight, and then, both of them bit me
And that’s why I am gonnae get a D.I.V.O.R.C.E

It’s no surprise he’s a dog person. Congratulations to a doppelgänger dog and his new person who truly deserve happiness with each other!