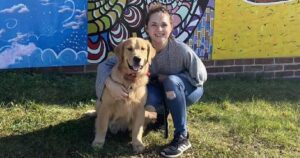 To Grace, Benny is more than just a family member and best friend. He is also her life-changing medical alert service dog.

Grace has been diagnosed with a medical condition where her blood pressure can suddenly plummet. But Benny, the one-year-old Golden Retriever, has been trained to warn her. This way, she has enough time to get into a safe position or even prevent passing out.

“You are the reason that I was okay this past year. You are the best thing that has ever happened to me,” the 19-year-old gushed on Facebook.

The last time Grace saw her beloved best friend, she was dropping him off at “Ohio Pet Resort” in Louisville for training. While Benny is already a highly trained medical alert service dog and knows the 200 commands that Grace taught him, he was still struggling with socializing with other dogs. So, after a tour, Grace allowed Benny to stay at the facility for training.

She felt reassured because they boasted “world-class training” in a “great learning environment,” the trainer appeared knowledgeable, and the facility had accumulated quite a few “five-star” reviews.

But on the morning of the day Grace was scheduled to pick up her precious pup, she received devastating news. Matthew Cox, the owner and trainer at “Ohio Pet Resort,” texted her a photo of a small hole in their fence. He said that Benny had run away and that her best friend was missing. Grace was devastated.

“I wouldn’t expect that he would ever run. Especially because he loves people so much,” said Grace.

Matthew called the local authorities, and then he, along with Grace, two kennel techs, the police, and the fire department, searched the entire area for hours. But no one, not even the neighbors on either side, had seen any sign of Benny. When asked whether Matthew had any surveillance videos of the property, the owner explained that he “ honestly didn’t think to save it.”

“He sent me a photo of the opening, which was only really a couple inches wide, and Benny is a 75 pound dog,” said Grace.

Grace then made a desperate plea on social media for help finding Benny. She shared her story, and she was met with so much love and support. However, it was in the comment section of her posts that other local pet parents started sharing their unsettling experiences with “Ohio Pet Resort.”

Many people shared that their furry family members returned home matted and ungroomed, sick and emaciated, and/or lacking any new training skills. Multiple commenters shared that they, like Grace, had their puppy pick-up days scheduled and rescheduled multiple times. They even went on to say that they were fearful that their dogs had been stolen. Many of them shared their worry that something “incredibly shady” is going on at the facility.

Despite posting and distributing flyers, following every lead, sharing all over social media, and continuing to look for Benny daily since his disappearance six weeks ago, he has yet to be found. There is currently an ongoing investigation looking into Benny’s whereabouts.

In response to a civil lawsuit filed by Grace, a search warrant allowed authorities to enter the facility on Thursday, July 29th. That day, local police combed the property for hours. Investigators have not yet confirmed whether any evidence was found, and criminal charges have yet to be filed.

If found, Benny has a microchip and could be identified. However, with more and more troubling details coming to light, people are questioning whether or not this was simply an escape.