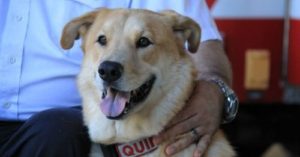 After 6 years of dedicated service, Clearwater Fire & Rescue Department had to say a tough goodbye to one of their hardest workers. With tears in their eyes, they sat next to their beloved partner as he listened to his final radio dispatch.

Quincy was a 12 year old Labrador mix that served his community for 10 years, offering his skilled nose in the search for the cause behind hundreds of fires. Responding to over 300 calls during his time with the fire department, he was a respected member of the community.

Quincy’s story began at an adoption event at the Pet Pal Animal Shelter in St. Petersburg, when he was just 6 months old. Quincy was tucked away in the corner of his cage, frightened by the many people passing him by. He soon locked eyes with a very special little girl, and knew he had found his forever family.

Soon after the Nueberger family brought Quincy home, they knew he was made for more. He was a bit on the wild side, but he sure was smart! Employed by his local fire department, Neuberger asked if Quincy could be the next pup to receive accelerant-detection training, since their previous arson dog had just retired. The training was approved, and Quincy spent the next six months training at the Florida Canine Academy.

Quincy went on to have an incredible career working alongside his firefighting colleagues, helping to sniff out and detect the cause behind hundreds of fires.

“He’s another tool in our toolbox that we use to determine the cause of a fire. For Quincy, it only takes minutes. Sometimes, seconds.” – Neuberger

With such an incredible career behind him, the news of his serious medical issues broke the hearts of so many Floridians. After much thought from his family, they made the difficult decision to put him to sleep. They just couldn’t see him in pain any longer.

On the day they laid him to rest, the Clear Water Fire Rescue sent out his final radio dispatch, thanking him for his dedicated service. He passed in the arms of his loving family.

It's a sad day for our agency as we mourn the loss of Quincy, our arson dog who served the city for six years before retiring last year. He received a final radio call and hugs from our personnel. He had been suffering from serious health issues lately. Quincy was 12 years old and had been the companion and partner of former Fire Inspector Ron Neuberger since his early days as a rescue dog. Quincy worked about 300 calls during his fire service in Clearwater and Lealman, where he started in 2008. He worked all across the Tampa Bay area, using his powerful nose to help sniff out whether or not arson was a factor in fire scenes. Thank you for your service, Quincy, you will be missed!

“Retired after a decade of hard work, today he will rest in peace.” – dispatchers

We thank you for your years of service Quincy, and we send all of our love to your family!

The post Beloved Arson Dog Hears His Final Radio Dispatch Before He Is Laid To Rest appeared first on iHeartDogs.com.