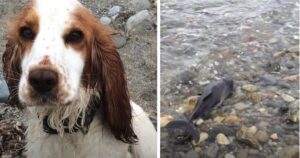 Though they can’t speak our language, dogs learned pretty early on that their barks can get our attention. A Spaniel named Leia once used her voice to lead her person to another animal in danger.

A video uploaded to YouTube shows the moment Leia’s person sees what she’s barking about. The two were spending the day on a beach near Criccieth in Wales when Leia made this discovery and, in turn, helped save a life.

Apparently, Leia barked at her dad until he paid attention to her. Describing the remarkable situation on YouTube, user “Criccieth Life” explained:

“I was photographing the beautiful scenery when I heard my dog barking at me from down the beach… Clearly, she had discovered something!”

As the video begins, Leia’s dad has just started to approach her. From further down the beach, you can see Leia standing near a dark lump. As the cameraman gets closer, that lump starts to resemble a sea creature.

When called, Leia trots away from the animal so her dad can inspect it. Amazingly, it turns out Leia barked to let him know the poor thing had beached itself.

A little dolphin (or possibly porpoise) swam too far into shallow waters and had gotten itself stuck on the rocks. Leia’s dad was able to gently guide the animal back into the water. It even seemed to do a few happy circles near the shore before swimming away.

“Criccieth Life” nicknamed the little sea creature Buddy. He stayed at the site where Buddy beached for a while to make sure he didn’t return. He also spoke to the coast guard, who later reported the sighting. There are certain numbers you can call if you find yourself in this situation, including the coast guard and, in this region, The Sea Watch Foundation.

“Think the little guy was lucky as there was nobody around for miles! And, if it wasn’t for my dog barking at me I would have missed him too!”

Watch the incredible footage on YouTube/below:

Praises For A Good Girl

Everyone has their own opinion on what the cameraman should have done when he found the beached porpoise. It’s easy enough to say from behind a keyboard. But regardless, praises go to smart Leia and her tireless barking.

“Thank you Leia and thank you human – you are both heroes! What a nice happy ending to something that could have turned ugly.” – Alba Monros via Facebook

“That’s lovely to see. Animals are totally intelligent. That dog is a true hero.” – Michelle Toni Horlock via Facebook

There’s definitely some truth to that old Lassie story; dogs can sense when someone is in trouble. Leia’s barking ended up saving a life.