Australian Shepherd Who Went Missing After Rollover Crash Has Been Found 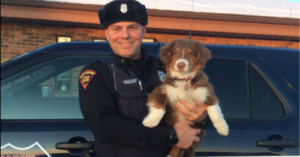 In dangerous situations, dogs rely on their fight or flight instincts far more than human beings do. Many dogs will flee from car crashes and if not found, can succumb to injuries. People in Green Bay, Wisconsin refused to let that happen to an Australian Shepherd who went missing after a rollover crash on Friday.

Bridget, a vet technician at Bay East Animal Hospital, was driving with her Australian Shepherd “River” on the way to work when the accident occurred. The little dog was thrown from the vehicle, and before Bridget or anyone else could get to him, disappeared.

At 9:38am on Friday morning, the animal hospital issued a plea on Facebook for help recovering the lost pup.

Community members were more than eager to help look for River. One commenter, Lindsay Rae Chaplin, wrote that she spent her lunch break searching the area where River disappeared.

“I went looking on my lunch break, searched the road that connects Nicolet to Bay Settlement through UWGB. I saw a group of turkeys, sadly no River pup. Praying for his safe return and reuniting with Bridget!”

At 4:13pm, Bay East Animal Hospital reported with glee that River had been found by a police officer near the county jail. He appeared not to have any severe injuries.

“BEST NEWS EVER!! River has been found!! He is here with us now and getting checked over. Thanks to State Patrol officer John P. Jones (Air Support Unit). A BIG THANKS TO ALL WHO WENT OUT LOOKING! Bridget is still recovering in the hospital but is doing fine!”

Katy Maloney, who is affiliated with the animal hospital, expressed gratitude for the rescuing Officer Jones and all the concerned Green Bay citizens who pitched in to search.

“He was our hero today!! This dedicated man went WAY beyond the call of duty and we are all so glad that our buddy River was found. What a sight to behold when this amazing officer came walking in to Bay East clinic with him late this afternoon, cheers, tears, and gratitude!! We’re all rooting for his mom and hope they’ll be together soon! Thank you again Officer Jones, we will all rest a little better tonight because of you. And also for ALL of our clients and other concerned good people that went out searching for him too in this cold December weather.”

Bridget is currently recovering in the hospital from non-life threatening injuries. She’ll be reunited with her beloved pup soon!

So whether you’re checking back in on this story because you heard River was missing or you’re just hearing the whole story happy ending and all now, hopefully this makes you smile today.

The post Australian Shepherd Who Went Missing After Rollover Crash Has Been Found appeared first on iHeartDogs.com.