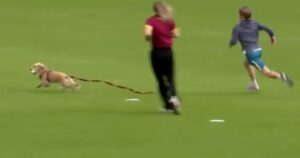 Sometimes, playful dogs and professional sports games just don’t mix. You never really know when a loose leash and a soaring ball can result in a necessary time-out.

During the 2021 semi-final match of the Women’s All-Ireland T20 cricket league, a furry spectator made that point especially clear. Dazzle the dog ran onto the field in the middle of the match, chasing a ball in motion.

Fortunately, the televised match brought the dog’s antics to the world. Hilarious footage of the dog running onto the field unexpectedly got some attention on social media this week.

Dragging his leash behind him, Dazzle bounds full speed towards the ball. Just as a player goes to pick it up, he snatches it up in his jaws and starts running.

The match commentators, noticing this bizarre twist of events, can’t help themselves and start cracking up. The spectator who Dazzle belongs to then runs onto the field, chasing after the pup.

Eventually, friendliness ends up being Dazzle’s downfall as he runs right into the arms of another player. His owner is then able to catch up with him, and the players retrieve the ball from Dazzle’s mouth. The commentator makes a little joke that the ball “may need a clean.”

Watch the hilarious interruption below to decide for yourself whether Dazzle deserves a scolding or a spot on the team:

Naturally, the clip showing Dazzle’s own little ball game went viral. The original tweet from Ireland Women’s Cricket has been retweeted over 2,500 times and liked nearly four times that amount.

Dazzle is now famous for being “bad.” Even some cricket fans have to admit the dog meant well.

“I love how the dog is captured by the offer of cuddles and not by force!” – @miriamlaila via Twitter

“Take him into the team, what a stunning fielding!” – @thom_bicks_says via Twitter

“The most ingenious ball tampering ever.” – @fatcat39 via Twitter

The International Cricket Council (ICC) even named Dazzle “player of the month.” They referred to the little rapscallion as “best fielder in Ireland cricket.”

“Exceptional athleticism in the field,” the ICC tweeted.

Dazzle may have broken the rules of cricket, but he was just playing the game according to his own doggy regulations. Can you really blame him for his enthusiasm?