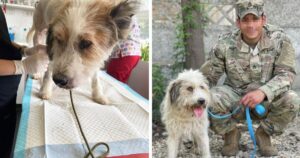 Serving your country overseas can not only be a dangerous venture, it can also get lonely. Many soldiers end up forming bonds with stray dogs they meet while deployed. After all, nothing brings comfort to someone in need like the love of a dog.

After rescuing two beautiful pups near his base, whom he named Turbo and Benji, a U.S. Army Staff Sergeant formed a close bond with both. Then, the unimaginable happened: An unidentified individual poisoned both of the Staff Sgt.’s new best friends.

In some countries like where Sgt. Laza was stationed, strays are considered nuisances and people will harm the dogs intentionally. That’s what happened to Turbo and Benji. A heartbroken Laza recalled when he first noticed something wrong:

“Both dogs seemed tired last week, so they were offered extra food and attention…”

Tragically, after consuming poison, Turbo didn’t make it through the night. Now, a devastated Laza is turning to the community for help saving Benji’s life.

He reached out to Paws of War, who got Benji the immediate veterinary care Sgt. Laza couldn’t access. Paws of War, an organization dedicated to U.S. military vets and their new canine companions, never asks the service members to pay for their services. They cover veterinary bills, transportation, and other costs to bring the dog to the U.S., for free as a thank you to those who serve.

Dereck Cartright, a disabled veteran who works as the stateside logistics coordinator at Paws of War, shared in a press release:

“It’s really awful what happened to these poor dogs. The Staff Sgt. is pleading for help to keep Benji alive and they have reached out to us. We will do everything we can, but we need the community to support our efforts.”

You Can Help The Staff Sgt. Save His Best Friend

As of this article, Benji is still alive and fighting for his life. In order to get him the best possible care without burdening the Staff Sgt., Paws of War posted a fundraiser on their site. Donations will go towards Benji’s round-the-clock medical care and beyond that to funding the Warn Torn Pups program that helps dogs like him.

Army Staff Sgt. Laza can’t stand to see poor Benji suffer, and he’s grateful to have the support of an organization like Paws of War.

“I cannot believe that someone poisoned my dogs, it breaks my heart. I’m so grateful for all the support that Paws of War and the people in the community provide in helping to save Benji. It’s such a blessing to have people to turn to.”

If you’re able, you can donate to Benji’s care via the Paws of War website.