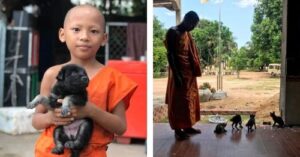 Southeast Asia is known for its beautiful temples and pagodas covered in intricate designs from floor to ceiling. Though you may expect to see these pagodas occupied by monks, many people are unaware of the large number of animals that call these pagodas their home as well.

What is a monk?

A monk is a member of a religious community that is dedicated to following vows of compassion, minimalist living, and obedience. You will likely see monks wearing simple fabric robes of orange or red, and living a life of poverty among their fellow monks at the pagoda.

Monks strive to live a life of compassion and kindness, meaning they cannot turn away a suffering sentient being. Since stray animals are in abundance in many parts of Cambodia, many animals make their way into the hands of monks.

Why are there so many animals at pagodas?

Since routine veterinary care is still a new concept in Cambodia, the stray animal population is out of control in big cities like Phnom Penh. Though many of the locals may not have the financial means to care for the stray dogs and cats, they do still want to help them. Since the local monks cannot turn away an animal in need, this results in stray animals being dropped off or abandoned at many of the pagodas around town. Since this happens so often, pagodas can fill with animals quickly.

The Relationship Between The Animals & The Monks

While these animals are not technically considered pets to the monks, they do still care for them deeply. Monks spend each morning walking the streets surrounding their pagoda for offerings of food from the locals, all of which they end up sharing with their animals once they return. While many pagodas do receive help when it comes to feeding and caring for these animals, it’s still a gracious act when they choose to share the little that they have with their furry friends.

Aside from the food they share is the love and companionship they offer. You’ll often see monks sitting down cloths for animals to sleep in, sharing their living quarters with the animals, as well as offering them daily cuddles just as any other “pet parent” would.

The Downside Of Animals Living At Pagodas

While pagodas are often seen as a safe haven for animals since the monks will feed and care for them, it can actually be a dangerous place since animal diseases can run rampant. Most of the animals that are dropped off at pagodas have not received any veterinary care throughout their lives, meaning they can carry deadly diseases that are easily passed on to others. No matter how much a monk loves the animals they share their lives with, they cannot battle infectious disease on their own. This is where the hard work of the PPAWS team comes in to save the day!

Weekly pagoda visits are one of the many free veterinary missions that the Phnom Penh Animal Welfare Society (PPAWS) offers to the animals of Cambodia. By providing free vaccines and spay and neuter services to pagoda animals, they can make pagodas a safer place for the animals that live there, as well as make the monk’s lives easier since they won’t have to worry about sick animals or overpopulation. By keeping the animals healthy and assisting the monks with animal care, this results in a better quality of life for everyone within the walls of the pagoda!

What does a pagoda visit look like for the PPAWS team?

I don’t know about you, but I had no idea what a standard interaction with a monk would be like. I’ve heard so many stories about monks not being able to speak or communicate with others, so I had no idea what to expect on my first pagoda mission.

First, you’ll need to understand that as a foreigner, you won’t likely be the one to communicate with the monks. The monks have more trust in their own people and have certain rules when it comes to communication, so I quickly learned that I just had to step back and let the PPAWS team do all the talking. This works out best anyways since monks don’t often speak English.

Another interesting fact that I learned during my first pagoda visit was that some monks were unable to speak with women or be touched by women based on their certain path. While I know this can be off-putting to some, just know that this has nothing to do with any type of disrespect toward women. Monks are on a path to spiritual enlightenment, and women can be seen as a distraction for that goal. It’s best just to respect their wishes and never participate in making them feel uncomfortable.

Once the PPAWS team has spoken with the head monk and received permission to treat their animals, we were able to get to work! Though we may have been the ones providing the medical care, the monks were extremely hands-on during the entire process.

Since the animals were often a bit afraid of us since we were strangers, the monks were the ones to hold the animals while we did our medical treatments. I was impressed with just how involved they were each step of the way, and how important our work was to them. The monks truly love the animals at their pagoda and want the very best for them in every way!

Helping Dogs And Cats At The Pagoda Missions In Cambodia

Our iHeartDogs team member Amber gives us an update about what she is doing with the PPAWS team in Cambodia. (Hint: It Includes Monks 🙂 ) GREAT JOB AMBER!!!If you want to donate to PPAWS – you can here ($1 is like $4 there) : https://www.ppaws.com/donations/

Posted by iHeartDogs.com on Thursday, February 27, 2020

The bond that monks share with their animals is unique, but certainly, something to support and offer compassion toward. If you would like to donate toward the many pagoda missions that PPAWS organizes, you can donate to their efforts here!

Check out Part 3 in my series – Amber Abroad: Part 3 – On A Mission To Save Lives And Change Attitudes