After Years Of Trauma, Lab Brothers Freeze In The Presence Of Rescuers 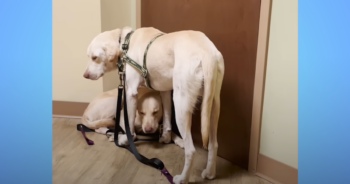 After being rescued from a hoarding situation, Buddy and Hobbs were both so scared that they would freeze in fear, and be unable to move. Their foster mom would have to scoop them up and carry them outside to do their business.

But after living in an environment where they were shown lots of love, and patience, their personalities are peeking through, and they’ve become playful pups.

These sweet souls are so fearful because of being forced to spend the previous period of their life living with a hoarder. A hoarding situation is a living environment where the animals that have been accumulated exceed the amount that the person is able to properly care for. This often results in animal neglect and suffering.

In this particular case, Buddy and Hobbs were living outside, in a man’s yard, with 15 other dogs. But after a while, their former owner was no longer able to afford to feed or take all 15 dogs to see a vet. Fortunately, he recognized that he wasn’t in a position to properly care for them, and was brave enough to ask for help.

But that doesn’t mean that their living situation hadn’t already had a lasting impact on their mental and physical well-being. Studies have shown that dogs who have been rescued from hoarding situations are far more likely to be fearful of humans and the world around them.

Buddy and Hobbs are prime examples of this and started out extremely afraid. They would literally stand frozen in fear when facing an upsetting or unfamiliar situation. Even something as simple as walking through a door frame and making their way outside to do their business became super scary after what they went through. So their foster mom would pick each of them up, and carry them out the door to do their business.

To help them become more comfortable, Camille (their foster mom) started by simply sitting in their space, reading to them, and allowing them the time to get familiar with her presence. Small baby steps and tiny victories added up, and after a while, they learned to emerge from their secure space, and even ask for pets.

Both Buddy And Hobbs Are Looking For a Home

Both of these sweet boys are currently adoptable (through Perfectly Imperfect Pups) and can be welcomed into a new home together or separately. But because of their traumatizing past, a particular set of circumstances will be ideal for these sweet boys:

Camille has helped them come into their own, and continue to build confidence by being patient, loving and kind. Many amazing dogs start out fearful due to troubled pasts, but Buddy and Hobbs are proof that a little love can go a long way. All they needed was a second chance.

To keep up with Camille, Buddy, and Hobbs, you can check them out on her Instagram, or if you’re interested in adopting one (or both) of these beautiful boys, click HERE to fill out an application.

The post After Years Of Trauma, Lab Brothers Freeze In The Presence Of Rescuers appeared first on iHeartDogs.com.