After 28 Days Lost In The Woods, A Dog Was Spotted On A Trailhead Camera 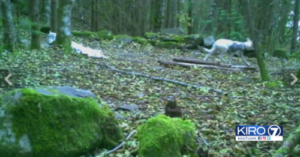 Sometimes when you look over at your dog snoozing on a pile of blankets, its hard to imagine them ever surviving past your front yard. Even our adorable fluffy little pals can surprise us though. A dog lost in the Cascades nearly a month ago really proves it.

On October 6th, 2019 Sierra Eberly and her 11-month-old dog Snow Beau were enjoying a run on the Mount Washington trail near Seattle. As they approached a section with steep rocks, Eberly took Snow Beau off his leash so they could both climb.

The agile pup reached the top before her, so she wasn’t there to steady him when he got spooked by a mountain biker. Snow Beau took off running.

She told Kiro 7 friends and strangers alike stepped in to help.

“I had people offering to go do search parties. I kept telling people before I found him, if anything good came from this, even if I didn’t ever find him, it was the restored faith in humans. Just how kind people can be.”

Eberly even went up and down the mountain 14 times. She set up a trail camera at the spot where Snow Beau had disappeared to automatically send her photos in case he showed up in one.

That was absolutely the right move, because he did. Snow Beau had clearly been in the area all this time.

Eberly returned to the trailhead again where she camped out with a friend. Snow Beau was still nowhere to be seen.

The next day, she received a phone call. Someone had found the wayward dog and scanned his QR code tag.

After 28 days on his own, Snow Beau had traveled 8 miles and lost 14 pounds, but Eberly knew her dog when she saw him.

Snow Beau seems pretty happy too, though no one will ever know for sure what he got up to all that time.

“I don’t know how he did it. Dogs are amazing. Especially this guy.”

Yep, this story is definitely a twofer: faith in humanity restored, faith in dogs confirmed.

The post After 28 Days Lost In The Woods, A Dog Was Spotted On A Trailhead Camera appeared first on iHeartDogs.com.