Afghanistan Military Dogs Left Behind As NonProfit Scrambles To Save Them 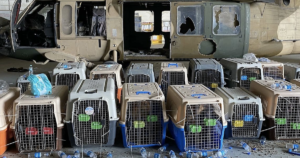 At first, there was a dispute when military dogs in Afghanistan allegedly got seats on planes over humans. But as it turns out, not all dogs got to fly to safety. A new image on social media revealed that many Afghanistan military dogs are all alone in kennels near an abandoned helicopter. If they don’t get help soon, they could die or suffer from torture.

These dogs served in our military with as much dedication as their handlers. They deserve a much better fate than this. Luckily, animal organizations are already trying to find a way to save them.

Animal rights advocates have described this situation as a death sentence for the dogs in Afghanistan. All U.S. troops reportedly left Afghanistan on August 30th, 2021, but 51 military dogs didn’t make it on the transport.

“It sickens us to sit idly by and watch these brave dogs who valiantly served our country be put to death or worse,” said Dr. Robin R. Ganzert, president and CEO of American Humane. “In order to prevent this tragedy from occurring, these K-9s should be loaded into whatever cargo space remains and flown to safety.”

Luckily, help is on the way. Joshua Hosler, the president of Veteran Sheepdogs of America, is doing everything he can to ensure that these military dogs are safe. The organization started raising money for a 737 plane out of Kabul, which costs about $1.67 million. They hope to also rescue some people from Kabul on the same plane.

The nonprofit announced that the dogs are being cared for in their crates and are provided with food and water. So, they’ll be safe while Hosler scrambles to gather enough funds for their rescue flight.

A rescue organization pledged $500,000 to this fundraiser, but the donation fell through. While it’s frustrating, Hosler is still confident that they can raise the necessary funds. The last update that the organization shared stated that they were up to $1.4 million so far.

“51 contracted military working dogs are safe & being cared for in their crates. We had all funds for the plane, but an animal rescue org fell through. So we are scrambling to cover their amount of $500,000 of the $1.67 million,” Veteran Sheepdogs of America wrote on Twitter.

There’s still time for these dogs to fly to safety. If you’d like to help rescue humans and military dogs from Afghanistan, please donate to Veteran Sheepdogs of America. Every donation helps!

The post Afghanistan Military Dogs Left Behind As NonProfit Scrambles To Save Them appeared first on iHeartDogs.com.