Adoption Fees Will Be Waived For California Veterans 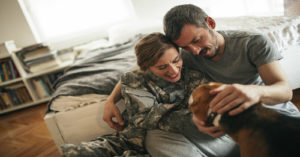 All shelter dogs need a loving home, and most veterans need a furry friend by their side. So, it is important that these dogs and humans can be brought together to make each other happy from now on. To make this dream become a reality, California animal shelters will be allowing veterans to adopt dogs for free once 2020 rolls around. It’s the perfect way to make lives better both for veterans and dogs all at the same time.

State Senator Ling Ling Chang introduced Senate Bill 245. This bill was created to get shelters to waive adoption fees for animals adopted by military veterans. The bill was recently signed by Governor Gavin Newsom, making an amazing situation for the veterans and shelter dogs looking for a best friend.

“This is a big win for veterans and shelter animals,” said Chang. “Our brave heroes deserve the same happiness, and I’m glad we can reduce the barriers for bringing together veterans seeking companion animals and [animals] in need of a home.”

To take advantage of these waived fees, veterans must prove their identity. All the have to do is show a current “veteran” driver’s license. Then, they will be clear to bring home their new family member.

This will go into effect right away on January 1st, 2020. This bill specifically mentions dogs and cats, but it is likely that the fees can be waived for other adoptable animals as well.

The bill came to be because Chang has two dogs in his own family. He knows how much joy and positivity those two dogs give him, so he wanted to do everything he could to allow more people to feel that joy, especially those that have served.

“As the saying goes, a dog is a man’s best friend,” said Chang. “When I’m home, my four-legged companions are a part of my family. Buster and Pepper bring me joy and laughter, and I benefit from the positive effects of their companionship.”

Chang believes that this bill will greatly benefit veterans and dogs, especially the veterans suffering from Post-Traumatic Stress Disorder. A dog companion can greatly improve the well-being of any person, especially a veteran.

This new bill is such an amazing idea for dogs and humans alike. Hopefully it will cause lots of shelter dogs and veterans to start off the new year in a much happier and more positive place. It’s amazing how much a dog can change a person’s life for the better. Hopefully more states will pass bills similar to this one.

The post Adoption Fees Will Be Waived For California Veterans appeared first on iHeartDogs.com.