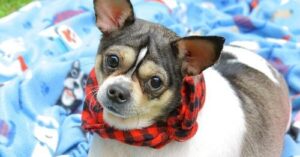 A handicapped chihuahua named Stanley is finally experiencing the love and care that he always deserved. Previously abandoned on the side of a busy highway, he has come a long way from the traumatized pup that he once was.

Stanley’s journey to a loving foster home began when he was heartlessly abandoned when he needed help the most. He was left in a crate that barely fit his body size on the side of a busy highway, instilling fear with every loud car that passed. His tiny legs appeared to have severe abnormalities, immobilizing him with fear due to his inability to escape. Thankfully, his nightmare ended when a good Samaritan notified the local animal control.

Animal control rushed to the scene where they discovered the unimaginable sight of Stanley in his tiny crate. He was then brought into the local animal shelter for further care, where they were able to assess his disabilities and come up with a plan of action. While the shelter was certainly safer than a crate on the side of the road, it was not the place for a traumatized pup.

The Ramapo-Bergen Animal Refuge caught wind of Stanley’s desperate situation and welcomed him into their care with open arms. They immediately had him examined by their veterinary team to come up with a plan of action and found the perfect foster home for him to begin his journey to health.

Stanley not only had severe deformities of his legs but was also 10 pounds heavier than the average chihuahua should be. His obesity paired with his leg abnormalities made him immobile, meaning he would need special intervention to help him lead a normal life.

Stanley’s new foster mom, Kathy, has gained experience caring for special pups like Stanley throughout her years of working with the Ramapo-Bergen Animal Refuge. With a loving foster mom on his side and the support of a wonderful rescue, it was time for Stanley to begin his road to recovery!

Stanley is now following a special diet and exercise regimen to help him fit into his very own custom wheelchair. He is enjoying every moment of his time with Kathy by his side and has gained quite the following of dedicated animal lovers that continue to root for him with each step.

“Stanley continues his weight loss journey and his mobility and strength continue to improve. He’s now able to push up high on his front legs and push off a little with his rear. He’s being fitted for a potential wheelchair as we speak! He’s loving all the attention, and will nibble on his person’s hands when he needs some more. He’s also fairly well potty trained – going on pads or outside. The more time we spend with Stanley, the more it becomes clear that whoever did this to him never even gave him a chance. His love is truly infectious and has touched us all along this wild ride. We can’t thank our RBARI Family enough for their support!” – The Ramapo-Bergen Animal Refuge

It warms our hearts to know that there are incredible rescues out there giving dogs like Stanley a second chance. We can’t wait to watch Stanley achieve his weight loss goals and finally step into his custom set of wheels!