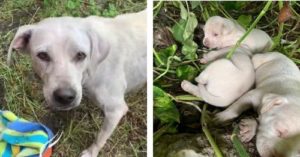 The Love Of All Dogs Rescue received a phone call from a worried dog lover about a litter of puppies she found in the bushes. Fearing for her puppies’ safety, mama quickly moved her babies to another hidden spot. Unfortunately, she did not realize that her new hiding spot would put them all at risk.

When the rescue responded to the original call, the puppies were long gone. Mama had already moved them, so all the rescue could do was wait until they were sighted again. Two days later the puppies were discovered again, but this time they needed immediate help.

The rescue workers found the puppies hiding under a truck in a puddle of cold mud. Mama tried her best to hide the babies away from the public eye in the best way she knew how, unaware of the risks of them freezing in the cold mud.

Mama dog stood watch as the rescue workers picked up the shivering puppies one by one and dried them off in a warm towel. They rescued all five puppies from their hiding spot under the truck, and planned to bring mama along with them.

It was clear that the mom was terrified, as she stood there trembling as she watched the rescuers pick up each puppy. After multiple attempts to catch her, it was clear that she was not willing to participate.

The puppies were becoming weak, so the rescuers knew they had to rush back to their clinic as soon as possible if they wanted to save the five little lives. They made the decision to leave without mom, but promised her that they would be back.

In the days following the rescue, they returned to the spot in which they had originally found the family. The helpless mom was nowhere to be found.

They shared photos of the mama dog on their Facebook in an effort to spread the word, and hopefully reunite her with her babies. Two days later, they got the tip they were looking for. Mama was found 15 miles away from the original rescue spot.

Once they arrived to the junkyard in which she was spotted, they quickly learned that she had spent her whole life here. Aside from the sad reality that she had been fending for herself for so long, was that she recently lost every single puppy in her last litter to the elements. This poor mama was doing everything in her power to keep this current litter safe.

After patiently waiting for her to come on her own, the rescuers were finally able to capture her. She would get to see her puppies again!

Mama and her babies were absolutely thrilled to be reunited. Along with their new cozy foster home came their new and adorable names; Snow White and her five dwarfs.

Snow White and her five dwarfs are now completely healthy and will soon set off to find their forever homes in New York. We are so happy that Snow White will get to see her babies through this journey, and hopefully find a loving home of her own!

The post A Terrified Mama Tried To Find A Safe Place For Her Puppies appeared first on iHeartDogs.com.