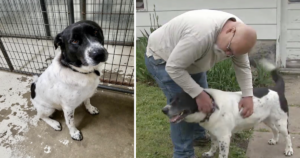 Sadly, the best dogs at the shelter are also the ones that are often overlooked. Many great dogs wait at shelters or rescues for years. It’s not because anything is wrong with them, but instead, it’s because their perfect family hasn’t come along yet.

This is especially true for a dog named Leo, who spent over 900 days with Dogs Forever in Iowa. He’s an extremely sweet dog, so the staff loved having him around. Leo had a lot of special requirements for his new home, but his perfect family was out there. He just had to be patient.

A few years ago, Linda Reynolds with Dogs Forever saved Leo from a different shelter, where he was at risk of euthanasia. She strongly believed that Leo deserved a second chance. He wasn’t the easiest dog to care for, but she knew someone would see past that and fall in love with his personality.

Anyone who followed Dogs Forever on social media quickly got to know Leo. In an attempt to help him get adopted, they posted frequent photos and videos of him. They showed viewers how much he liked to play and how well he was doing with training. Yet, no one showed interest in adopting him.

Leo is a very good dog, but he can be difficult at times. He needed a home with no dogs, cats, or young children. He also needs plenty of exercise, so the staff hoped he could find a home with a fenced-in yard. With so many requirements, it was hard to find him the perfect match. Luckily, Reynolds never gave up hope.

Waiting at a shelter for many years can make any dog seem difficult though. What Leo really needed was someone to take a chance on him. After about 900 days with Dogs Forever, Leo finally got that opportunity.

David Evens was looking for the perfect companion dog when he stumbled across Leo’s picture on the website. Right away, he felt a special connection to the dog, so he decided to visit him. At the shelter, the staff explained all Leo’s needs, and Evens had no problems with it.

Evens worked with the trainer to help him bond with Leo. He didn’t want to rush anything, so he spent a total of three months training Leo and getting to know him better. Then, after that time was up, he was ready to bring the pup home. Leo’s long stay at the shelter was finally over!

As happy as Leo was to finally have a forever home, Evens was even happier. He had recently gone through a difficult breakup, so he had been extremely lonely. Luckily, Leo was able to fill that void and provide him the best companionship. Leo also made sure to protect his dad from all the squirrels and birds in the yard too. Their special bond proves that every dog has a perfect family out there, so it’s important to never give up on them.

The post 900-Day Shelter Resident Gets Adopted And Cures His Dad’s Loneliness appeared first on iHeartDogs.com.