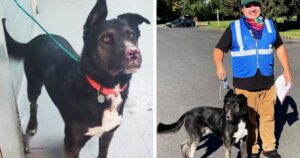 Dogs are capable of crossing remarkably long distances on foot by themselves. It’s unfortunate we must re-learn this lesson every time a missing dog turns up over a hundred miles away from home.

On September 25th, 2021, hikers found a 5-year-old German Shepherd mix named Teddy Bear lost in Wenatchee National Forest in Washington. They brought him out of the woods and into the care of the Humane Society for Tacoma & Pierce County.

The first thing the shelter did when Teddy Bear was admitted was scan him for a microchip. That scan revealed the crazy distance this dog had come.

A Microchip Works Its Magic

The good news was that Teddy Bear did, in fact, have a microchip with information on it. Shockingly, the microchip’s scan revealed Teddy Bear’s home was 150 miles away in Yakima, Washington. Who knows how he made it so far away, but thank goodness he had a registered chip.

Obviously, 150 miles isn’t exactly local, but the Humane Society was committed to ensuring Teddy was reunited with the family missing him. Nathan Van Ness, pet support coordinator at the Humane Society for Tacoma & Pierce County, said the organization didn’t think twice about putting in the effort:

“We had the opportunity to get this boy back to his family. Knowing there was a regular transport between them, we immediately reached out to Seattle Humane and the Yakima Humane Society.”

Through a network of animal rescues, the Humane Society of Tacoma & Pierce County secured a lift for Teddy Bear, all the way back to Yakima. It turns out Seattle Humane already makes regular trips between their campus and the Yakima Humane Society. They were more than happy to use “Chelsey’s Rescue Rider,” a vehicle that makes long rescue trips for the organization.

“Chelsey’s Rescue Rider” frequently transports at-risk animals from Eastern Washington and Los Angeles to the Seattle area. This time, the van went in the opposite direction to bring Teddy back home.

“Our Lifesaver Assistant transported Teddy Bear, and he was thrilled to do it! We love reuniting pets to their homes.”

A Network Of Animal Lovers

Teddy Bear eventually reunited with his family, who were thrilled to see their missing dog. Importantly, this was all possible through the teamwork of animal lovers. Van Ness said:

“We’re so grateful to be a part of an animal welfare network that can come together to support an animal in need, and we hope it will continue to build.”

In a Facebook post, Humane Society for Tacoma and Pierce County emphasized the value of an up-to-date microchip. Without one, Teddy Bear could still be homeless.

“You can’t always prevent your pet from going missing, but you can make sure they get back home safely. Microchipping is a quick and low-cost option for your contact information to always be with your pet.”

The post 3 Rescues Work Together To Bring Lost Dog 150 Miles Back Home appeared first on iHeartDogs.com.