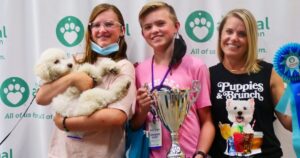 When you think of dog shows, maybe you imagine the purebred-focused events you see on TV on Thanksgiving. The Animal Foundation’s annual “Best in Show” actually features adoptable rescue dogs of all shapes and sizes.

“Best in Show” is the Animal Foundation’s biggest fundraiser of the year, and it’s been going on for 18 years now. The money raised goes to several important causes, like their foster program and their kitten nursery.

For the first time in 2021, Animal Foundation also featured adoptable kittens in their formerly dogs-only show. Sweetening the deal even further was the presence of celebrity guest judges singer/songwriter Debbie Gibson, Chloe Koast of KSNV, and entertainer Gregory Popovich.

After last year’s event went virtual due to the pandemic, Animal Foundation’s “Best in Show” opened up to spectators again in September 2021. This year’s show took place at the Thomas & Mack Center in Las Vegas. Of course, with the delta variant making things a little iffy, viewers were welcomed to join via live stream as well.

Tickets only cost $5, and a silent auction at the event raised even more funds for saving animals. These shelter dogs certainly benefit from the Animal Foundation’s support! All 28 dogs who participated this year ended up finding their forever homes after the event.

According to The Animal Foundation, some of the show participants actually became foster fails and ended up with the families who looked after them leading up to the event. That includes the show winner, a little tripod dog named Elton.

Here’s a little peek at what the show looked like:

All About Winner Elton

When Elton arrived at the shelter at nine months old, he had several open wounds on his leg. The vets had to make an important decision to save him. The Animal Foundation wrote on Facebook that it didn’t keep Elton down:

“Worried an infection could spread throughout his body our veterinary team knew it was best to amputate Elton’s leg. Our team quickly fell in love with Elton’s sweet disposition.”

This sweet miniature Poodle captured the hearts of his foster family too, who ended up adopting him for life. The organization added:

“He will spend the rest of his life having fun pain free.”

Elton deserves his win, but after the success of this event, all the dogs are winners! If you had to miss this year’s “Best in Show” event, follow The Animal Foundation for more information on the next one.