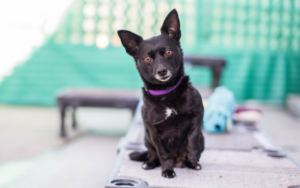 When the nation’s top animal welfare experts announced they were looking for the best ideas on how to save more animal lives, over 200 animal shelters, rescue organizations, and animal welfare charities jumped into action. Whether they had an idea they once wrote down on the back of a napkin or something they’ve been thinking about for years, the 2018 Innovation Showdown is giving them the opportunity to bring it all together.

Known as the “Shark Tank” of animal welfare, the Innovation Showdown was started in 2017 as a way to get people thinking about the problems needing to be solved when it comes to saving lives. The Petco Foundation along with The Jackson Galaxy Project and several other major animal welfare organizations want to not only identify the problems, but also fund the solutions. All 226 entrants made videos explaining their ideas hoping to win up to $350,000 to make their ideas come to life. The deadline has passed, the videos have been viewed, and now it’s down to the top three finalists.

Front Street Animal Shelter in Sacramento adopts out hundreds of rescue dogs and cats a year, but they’re faced with a big problem. When lost animals are found and brought to their doors, two out of three are never picked up by their owners. Their kennels fill up faster than they can facilitate adoptions, and the dogs that are lost looking for their homes have no choice but to be adopted by new families. Hundreds of families end up losing their best friends, and the shelter burns through resources desperately trying to find their original homes.

Front Street Animal Shelter believes they have the solution to this lost pet problem. They want to use the Innovation Showdown prize money to develop a program called Lost2Found. Their idea tackles the issue on two fronts. It makes looking for a lost dog more convenient, and it educates people about the best ways to bring a lost pet back home. When a dog goes missing, the first thing their owner will do is send a text with one word—”stray.” Within seconds, they’ll receive a text back with easy-to-access links to the Front Street Animal Shelter’s lost dog and lost cat web pages. If they don’t see their pet’s picture, the program will continue texting them every few days as a reminder that they need to keep looking. They’ll also be sent helpful information on things like how to make the best lost pet flier and how cats behave when they’re on their own.

Finally, when a text comes in that shows their lost friend’s furry face safe and sound at the shelter, they can get in their car and get ready for a heartfelt reunion. The lost pet gets to go home, the pet owner gets their family member back, and the shelter leaves room for another animal in need—it’s a win-win-win kind of situation.

While the issue of overcrowded shelters is a problem faced by the entire country, St. Hubert’s Animal Welfare Center in New Jersey recognizes the fact that some shelters are more overburdened than others. These under-resourced organizations do everything they can to save lives, but they need help to make it happen. St. Hubert’s Animal Welfare Center found a way to better distribute the strain to ensure location is never the deciding factor that leads to the euthanization of an innocent animal.

They’ve created a program where sister shelters from across the country are connected through an animal way station. Shelters with too many animals and not enough resources have the opportunity to transport animals that would otherwise be victims of euthanasia to shelters with more room and resources. As of now, St. Hubert’s transfers 80-90 animals every week through this way station. With greater funds, they’ll also be able to help shelters in need by providing money for spay and neuter programs, staff training, and animal essentials. Their idea is all about teamwork; shelters need to work together to save the most lives.

Between the animal intake desk, caring for each animal, providing for veterinary needs, facilitating adoptions, cleaning, and doing everything else necessary to keep a shelter up and running, there’s not enough time in the day to get everything done. Getting dogs into forever families is always priority number one, but most shelters end up skipping an essential step in the process simply because they don’t have the time or resources to get it done.

Marketing is a huge part of getting animals adopted. It doesn’t matter whether the shelter is a non-profit or not, letting the public know about their services and doing it in a way that best attracts attention makes a world of difference in the shelter’s success. Strong marketing typically takes an entire team of trained professionals along with expensive software that most shelters can’t afford or have time for, but Hearts Speak in New York has an idea that’ll benefit adoptable animals and animal welfare organizations of all kinds.

They’ve presented their cloud-based tool called Petblicity to the Innovation Showdown investors hoping to earn the funds they need to make this free tool available to shelters everywhere. Instead of spending hours devising the best marketing plans, designing promotional materials, and spending big bucks on the software needed to make it happen, Petblicity does it all. The program includes specific tools, tips, and tutorials to make it possible for everyone—regardless of skill level—to create the life-saving marketing materials a shelter needs. From email announcements to adoption advertisements, Petblicity means good marketing is no longer a luxury for shelters, but something that saves lives.

Each one of these ideas has potential to change the world of animal welfare. They’ve made it into the top three, but there can only be one first place Innovation Showdown winner. On May 16, the three organizations will pitch their ideas one last time to a team of investors. The judging panel will be looking for the idea that presents the best lifesaving return of investment. The final event will be broadcast live on the Petco Foundation’s Facebook page on May 16 from 4:30 to 5:30 PM CST.

Who do you think will win?