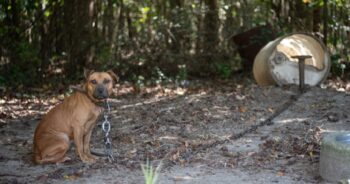 Just last week, the Humane Society of the United States worked in cooperation with federal agents, local law enforcement, multiple veterinarians, and the non-profit organization Bark Nation to take down what is believed to be the largest suspected dog fighting network in South Carolina history.

Officials executed their investigation during a scheduled dog fight and were able to immediately rescue 14 dogs. Then, a day later, they sent agents to sites across the state suspected of being used for fighting.

But what they found when they arrived was more awful than they imagined. The poor pups endured endless injuries, were denied food, and lived in nightmarish conditions. Many dogs were tied down by heavy chains and living outside with nothing more than an overturned barrel for protection from the elements.

Many of the pups had injuries consistent with dogfighting, with dozens suffering from severe scarring, bruising, and infected open wounds. They also saw typical dog fighting injuries, including lacerations, abscesses, deep puncture wounds, and broken bones. It was also apparent that many dogs suffered untreated fractures that had not healed properly.

“It’s truly distressing to come upon dogs who are severely injured yet chained to trees or left to languish in a pen instead of getting the care they desperately need,” said Adam Parascandola, vice president of the animal rescue team for the Humane Society of the United States.

Most of the dogs, including pregnant and nursing mothers, also had no apparent access to food or water while being kept in dirty pens and tiny, wired cages. Many dogs were excessively thin and showed sure signs of malnourishment.

This operation is part of an ongoing investigation by the USDA OIG and the South Carolina Law Enforcement Division. It is a felony punishable by up to five years in federal prison for fighting dogs or for possessing, training, selling, buying, delivering, receiving, or transporting dogs intended for use in a fight.

Dog fighting is heinous and often includes breeding and conditioning dogs to dislike one another. Dogs forced to fight often die of blood loss, shock, dehydration, exhaustion, or infection while enduring an endless cycle of mistreatment and abuse.

Some dogs die after a single fight, while others escape alive and continue to face horrific abuse.

The dogs rescued from this operation are being transported to safe, undisclosed locations where they will receive immediate medical care.