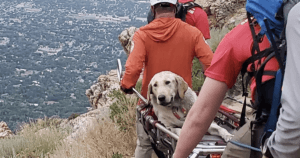 Leo the 120-pound Labrador Retriever’s story has warned other dog parents about hot temperatures. Dogs can’t regulate heat as easily as humans, which makes them prone to heat stroke. So, it’s important to be cautious during summer activities with your dog.

Unfortunately, Leo’s dad didn’t plan ahead during a mountain hiking trip. As they traveled up Mount Olympus in Utah, the weather got hotter. Eventually, Leo showed signs of overheating. It grew to the point where the pup couldn’t seem to move on his own.

Help is on the Way!

Leo’s dad tried to keep the pup hydrated, but it was no use. He tried to cool him down and give him extra water, but soon his water supply ran out. Even with all of the hiker’s efforts, poor Leo’s condition didn’t improve. So, the man called Salt Lake County Sheriff’s Search and Rescue, and they rushed to the scene.

The temperatures neared 100 degrees as the team came to save Leo. They brought large amounts of rescue equipment just in case. When they finally reached the pup, he was in rough shape. He drank about 4 or 5 liters of water, but he was still weak. Since he wasn’t capable of walking down the mountain on his own, the rescuers had to load him on a litter.

It took several hours to get Leo down the mountain. The poor pup still looked exhausted during the entire trip, but he also seemed relieved to be rescued. Leo’s dad and all the rescuers were in good condition after the trip, but Leo was rushed to the vet.

A Warning for Dog Parents

The rescuers shared an update on Facebook saying that Leo’s health is improving. He’s overcoming his heat exhaustion and his kidney function is returning to normal. At the vet, he is also working on walking again. Overall, he’s improving and should be able to return home soon. However, his dad needs to be more cautious while walking with Leo in the future. Paying attention to the signs of canine heat stroke is crucial.

“Remember your 4 legged friend doesn’t regulate heat as well as you do. If you’re going to hike with your doggy, leave early or wait a few more months until it cools off,” Salt Lake County Sheriff’s Office Search and Rescue suggests.

Every time the heat rises outside, it’s important to keep an eye on your dog. Even if they love playing outside, you should limit their exercise until the weather cools down. Shorter walks are usually better during the hot months of summer. Hopefully, Leo’s story is the perfect reminder to be careful of your dog’s health during extreme heat.