110-Pound Dog Was Rescued From A Small Drain Pipe 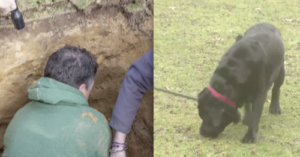 The Wading River Fire Department was having an exciting day as they escorted Santa Claus through the community to greet children and collect donations for a food drive. However, they did not expect to have such an interesting rescue mission following this fun event. During this escort, they received a call about a dog that had gotten stuck in a drain pipe at the Great Rock Golf Course in Long Island. Officials raced to the scene right away.

While Jim Devaney had been golfing, his 110-pound Labrador Retriever named Carson had gotten into a predicament. The large dog had slipped and fallen into a half-frozen drainage pond that was near the 18th hole of the golf course. He ended up getting stuck in an 18-inch wide drainage pipe.

Devaney had tried to get a better look at the drainage pipe, but as he did so, Carson backed up further and further into the pipe. He ended up getting so far that there was no way for him to crawl back out.

The drainage pipe runs underground and leads runoff rainwater into the pond. Devaney realized that he’d have to get underground somehow to help Carson escape. Unsure how to do this, he called the fire department for help.

Officials knew that they had to get Carson out of the pipe right away. Half of the pipe was filled with ice-cold water, and they knew that if Carson stayed in there too long, he would get hurt very badly.

So, to save Carson as soon as possible, the authorities jumped into action. They started digging a hole ahead of where they suspected that Carson was. That way, they could free Carson as he continued to move backwards.

Devaney estimated that Carson was likely almost 50 feet from where he first entered the pipe. So, the officers dug a hole at that distance. Then, they cut into the pipe, praying that Carson hadn’t already scooted past where the hole was.

Sure enough, Devaney had been right. Carson was within a few feet from the hole. Since the hole was so small, only 2 of the 15 first responders were able reach into it. Officials carefully coaxed Carson out of the pipe until finally, he was able to scoot backwards and be freed.

Now, Carson is doing better than ever. He’s running around and enjoying life, just as he did before this scary experience. He is so lucky to have a dad that cares about him so much. If Devaney hadn’t known his dog so well, they might have dug the hole in the wrong spot. This proves that the bond between a dog and their human is an amazing thing that should not be taken for granted.

The post 110-Pound Dog Was Rescued From A Small Drain Pipe appeared first on iHeartDogs.com.